Chronicles From the Field: COP 25

The Climate Summit - COP25 - started on Monday 2 December in Madrid, under the Chilean Presidency, which was unable to host the event in Santiago de Chile as planned due to the domestic situation. Despite this unprecedented change of location, the COP will have to unite nearly 30,000 participants from all over the world.

From Sciences Po, Carola Klöck, assistant professor at CERI, is on site in the context of her research on small island developing states (SIDS). She is interested in how these states— highly affected but with very limited resources and capacities—engage in negotiations and make their voices heard in the process. 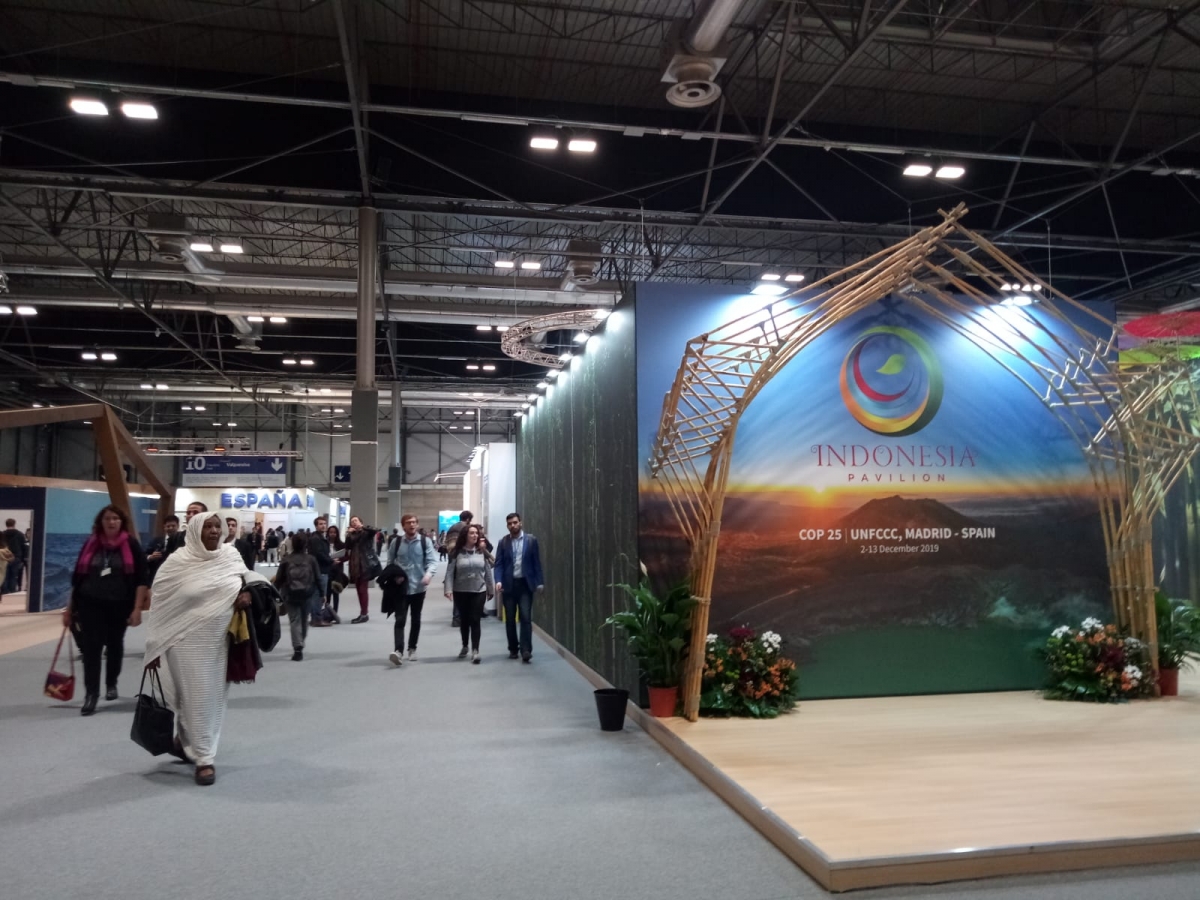 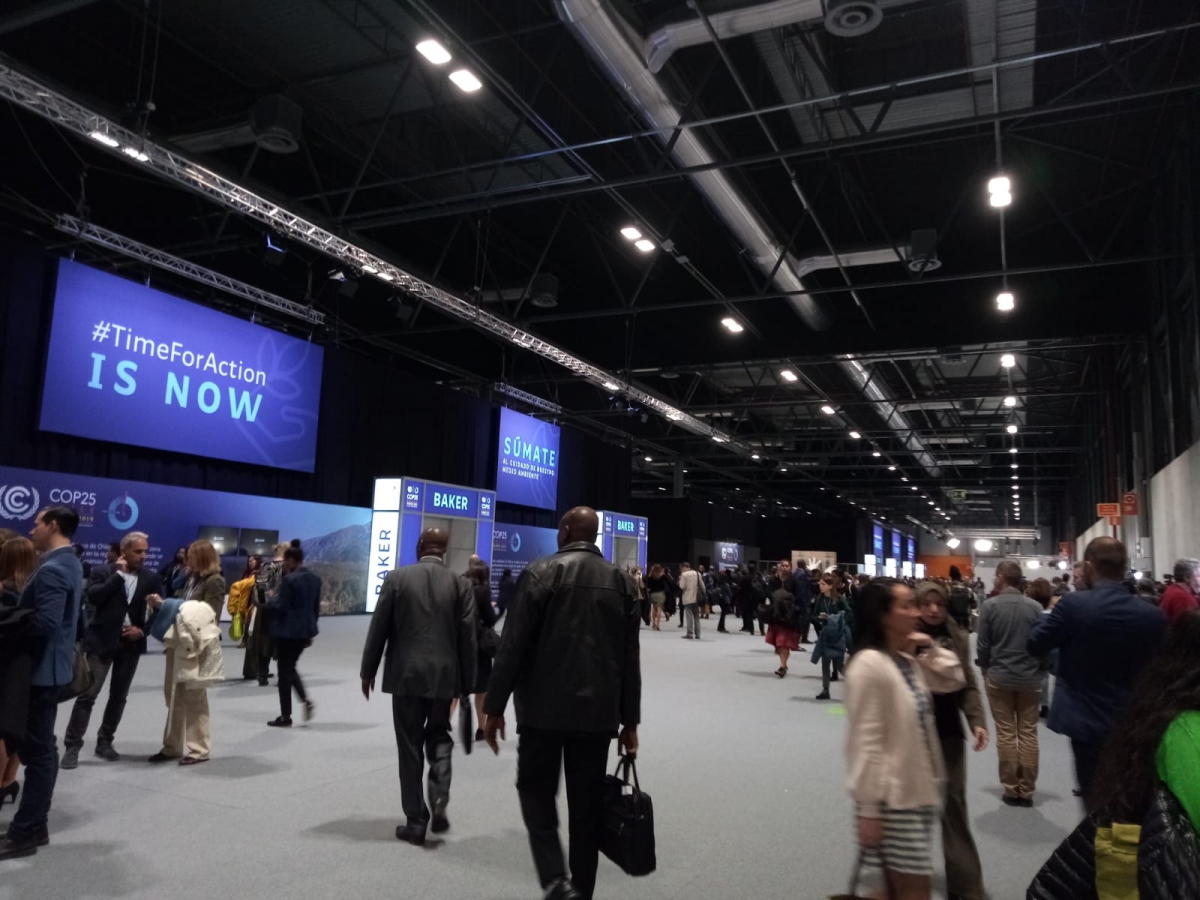 The government of Seychelles, the Nature Conservancy and Pew Charitable Trust co-organised a side-event ("Nature-Based Solutions: Integrating Coastal Ecosystems in 2020 NDCs") on Monday 2nd December to discuss nature-based solutions. Representatives from small islands across the world oceans shared their very personal experiences with the impacts of climate change: from the disappearance of birds in Belize to the extreme winds and horrible destruction wrought by hurricane Dorian in the Bahamas. While mitigation remains thus central, the speakers also highlighted how their islands actively protect and restore coastal wetlands such as mangroves and seagrass beds, recognising that healthy ecosystem helps to deal with the devastating impacts of climate change.

How do we handle the disconnect between our work for sustainability and the life we lead? This is the question that Sarah Meyers (MIT Environmental Solutions Initiative) posed at the Co-Creative Reflection and Dialogue Space at COP25. How can we justify the carbon footprint that comes with our work—including flights and trains to the COP? There are obviously no clear answers, but the discussion this afternoon invited participants to think about our own contributions to climate change, and in particular encouraged everyone to speak about it.

At every COP, the Climate Action Network (CAN) awards the so-called Fossil of the Day: a prize for those “that do the most to do the least”, that is, parties that actively block and brake the negotiations and ambitious climate decisions.

At COP25, the award was given to three countries: Japan, Australia and Brazil, for their pro-fossil fuel behaviour, such as the Australian prime minister refusing to link the recent extreme bushfires that ravaged Australia to climate change.

Australia, Brazil and Japan are winners of the Fossil of the Day Award. Photo by Carola Kloeck

The Intergovernmental Panel on Climate Change (IPCC) reviews the latest climate science to help policy makers take informed decisions. The IPCC presents its two latest Special Reports—on Land and on the Ocean and Cryosphere—to negotiators at Special Events today and tomorrow. The evidence clearly shows how the Earth has been warming, with dire consequences, for example on food security or habitat for flora and fauna.

While the IPCC is careful not to be policy prescriptive, the UNFCCC, some parties (for example St. Kitts and Nevis) and civil society underlined how important these reports and science in general are and urged everyone to use the results as guidance.

The Special Reports can be found online for Land, and for Ocean and Cryosphere.

Today is the Young and Future Generations Day at COP25. Young people are increasingly making their voice heard, not only through mass mobilisation on the street—as the Fridays for Future movement has shown—but also inside the climate negotiations. The young and future generations day at COP25 was opened this morning with young people from across the globe—from Fiji to Poland and Canada to Pakistan—who shared their stories and experiences in mobilising and proposing solutions. The motto of the overall COP—Time to Act—goes hand in hand with the motto of the young: We Are Action!

At the Moana Blue Pacific Pavilion, an intergenerational dialogue brought together senior climate change leaders, notably H.E. Enele Sopoaga, former Prime Minister of Tuvalu, with young leaders from the Pacific. H.E. Enele Sopaga shared his concerns about the slow process of the negotiations, and stressed that it is up to the developed countries to take action and not just talk in endless rounds of COPs. He referred to the recent Pacific Islands Forum, hosted in Funafuti, Tuvalua, that called for ambitious climate action and a just transition away from fossil fuels. The Forum's communiqué is available online.

Parties huddle around Saudi-Arabia as the decision on the agenda item 7(b) of the Subsidiary Body for Scientific and Technological Advice—research and systematic observation—hinges on one paragraph that Saudi-Arabia has proposed to add to the document but other countries do not want. Saudi-Arabia wants to request an additional report on scientific gaps, while other parties argue that the existing IPCC and other reports already include gaps. This shows how one country can slow down and even block multilateral negotiations that operate under a consensus decision making rule. Over the last decades of negotiations, single countries, such as Saudi-Arabia, have repeatedly and on purpose, slowed down talks. For details on this, Joanna Depledge wrote a research article about Saudi-Arabia’s negative role in the negotiations; despite being published over 10 years ago, the analysis clearly remains relevant. 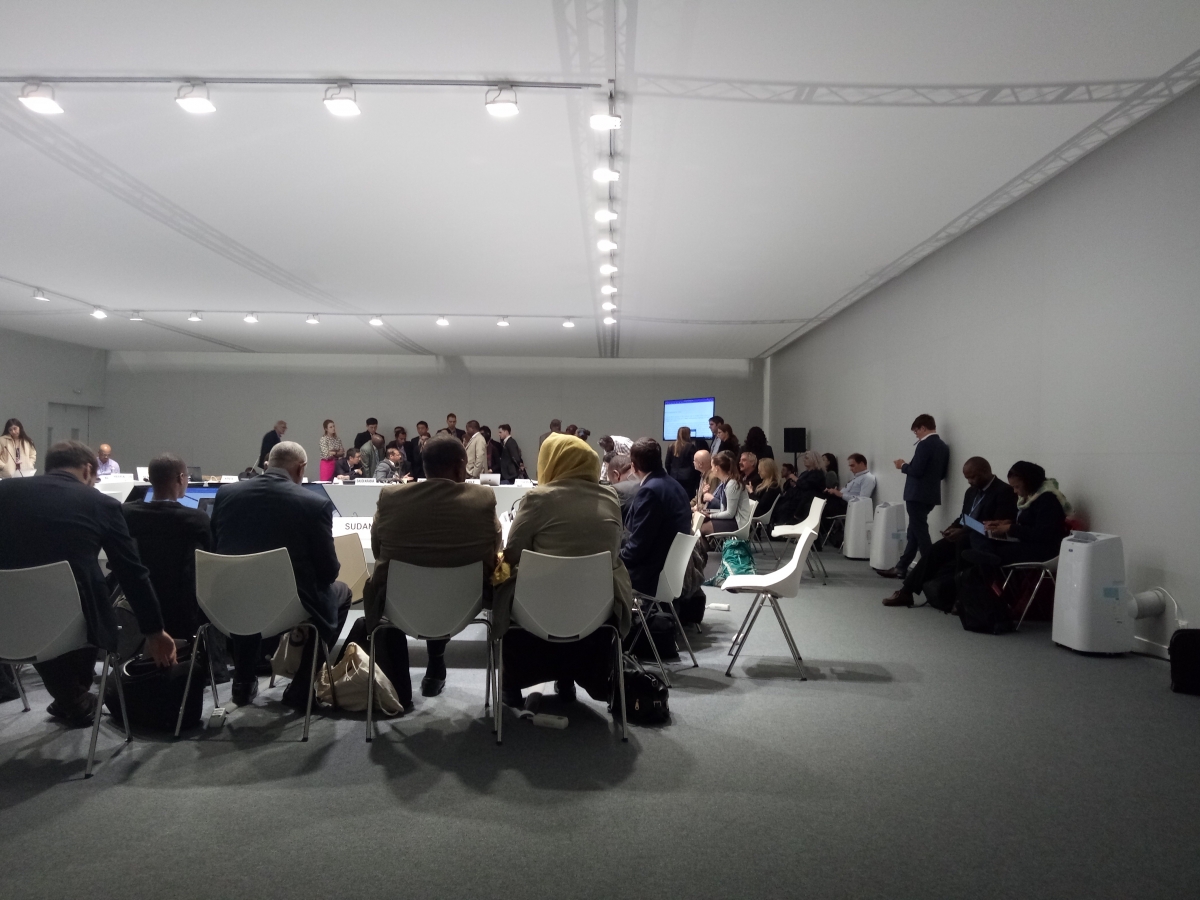 COP 25 - Saturday 7 December. Discussions about article 7b (research and systematic observation) of the Subsidiary Body for Scientific and Technological Advice (SBSTA) Photo by Carola Kloeck

The second week of negotiations has started and ministers start to arrive as the more technical subsidiary bodies (for implementation, SBI, and for Scientific and Technological Advice, SBSTA) struggle to finalise their decision texts. Another person that arrived at the end of last week is of course Greta Thunberg. She already appeared at the massive climate march that brought thousands of demonstrators onto the Madrid streets on Friday evening.

Today, a press conference with Greta Thunberg and other key figures of the Fridays for Future movement such as Luisa Neubauer (who coordinates the movement in Germany) is scheduled and has led to long queues outside the press conference room, although only members of the press will be allowed inside.

The press conference is webcast live and the video will also be available on demand afterwards.

As the negotiations started with the high level segment in which the many outstanding issues are now discussed behind closed doors at the ministerial level or with the heads of delegations, the side events also become more high level. Today, former US Vice-President Al Gore made a presentation on the dire reality of the climate crisis across the world, citing examples of extreme weather events from Spain, France, the U.S., Pakistan, Mozambique and many, many other parts of the world. But Al Gore’s Climate Reality Project—in some ways a sequel to "An Inconvenient Truth"—not only made plainly clear that we are in a climate crisis; it also emphasised that we have solutions, notably renewable energy, whose cost has fallen, often below that of fossil fuel. The transition to a low-carbon and greener future is under way but urgently needs to accelerate.

The Pacific Pavilion welcomed today Kiribati’s President Maamau, Tuvalu’s Prime Minister Natano, the Maldives’ Minister of the Environment Hassan, and other high-level climate champions from low-lying atoll nations. The evening’s side event focused on the very real and very pressing challenges of climate change for atoll nations, whose unique coral islands are extremely low-lying and under severe pressure of climate change impacts, notably sea-level rise, but also drought and groundwater salinisation. Young i-Kiribati Tabeta closed the side event with a passionate and emotional plea to save her beloved motherland, her beloved Kiribati, whose very existence is threatened by climate change.

Very clearly, atoll islanders do not want to leave their home, the land of their ancestors. They are fighting for their homes, and we need to join that fight.

COP 25 - Kava, a traditional drink from the Pacific islands, is served after the side event & 21-year old Tabeta from Kiribati performs a traditional dance. Photos by Carola Kloeck

Another high-level speaker from the US—former Secretary of State John Kerry—was at the COP today to present his work to mobilise around climate change. World War Zero brings together various leaders, celebrities and concerned citizens to fight “the war we must wage and win.” John Kerry highlighted the power of democracy, protests and citizens. Political accountability and making climate change a voting issue would make the difference. He has no doubt that we can manage the transition to a low-carbon economy. The question is just: can we make it fast enough?

More information on the campaign can be found here

Today, I spoke on a side event on climate finance. My colleague Romain Weikmans (Université Libre de Bruxelles) brought together several researchers and practitioners to discuss the state of climate finance 10 years after Copenhagen. At the infamous 2009 Copenhagen climate summit, industrialised countries promised $100 million in new and additional resources for both adaptation and mitigation in the developing world. Climate finance remains one of the most contested issues in the negotiations. The side event highlighted some of the controversies around finance and called for more transparency in the finance regime.

The video of the event is available here

The slides of our presentations are available here

Because of the ongoing train strike in France, I had to leave COP25 earlier than expected. Rather than take the train on Saturday, I took a bus from Madrid to Paris on Friday 13 December—thought to be the last day of the two weeks of negotiations. It’s a long trip, but surprisingly comfortable, and much shorter than the trip of some of my co-passengers. Several COP participants, particularly youth activists, avoid flying, for example 21-year old Sara Nyberg who came all the way from Stockholm, Sweden, to Madrid, by bus and train. Maybe not as comfortable as a flight of a few hours, but low-carbon alternatives are clearly available and doable. Examples like this are a reason for hope, despite the disappointing negotiation outcomes – finally reached on Sunday afternoon, long after the scheduled end of the summit.

COP 25, Friday 13 December. Photos by Carola Kloeck  -  After days of consultations and negotiations behind closed doors, a final stocktaking meeting was expected to start at 1pm. Observer delegates are waiting in line to get into the plenary.

Access the CERI's ressources on the environment, climate change and natural disasters