Chronology of the Paris campus: a real estate adventure

THE REIMS CAMPUS: A MODEL FOR THE ARTILLERIE

The Hôtel de l’Artillerie: a long and tumultuous history 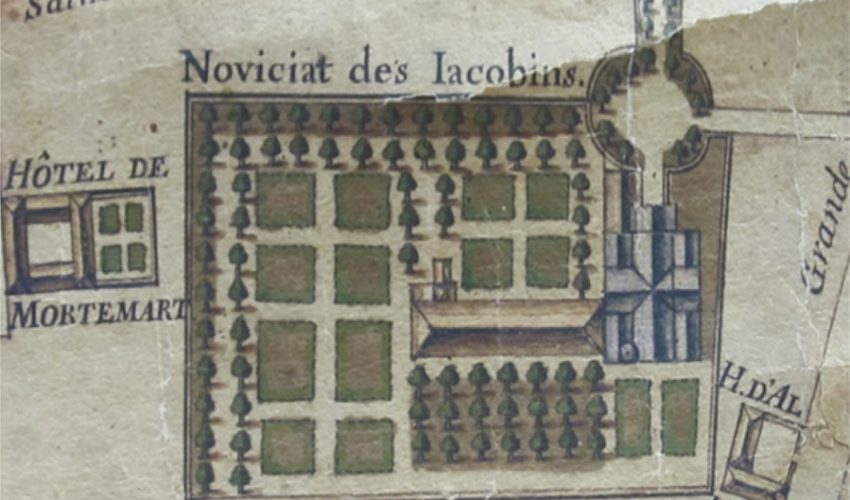 The cloister's northern wing in 1713

The Hôtel de l’Artillerie on place Saint-Thomas d’Aquin, previously a Dominican novitiate, a weapons museum and a military site, is ushering in a new phase of its long and tumultuous history with Sciences Po.

In 1632, the order of the reformed Dominicans, or Jacobins, settled on the lands of the powerful royal abbey of Saint-Germain-des-Prés, in the rural suburb of the same name, to found a novitiate in a house on rue des Vaches. At the time, Saint-Germain was a vast country estate belonging to the Abbey and the University of Paris, located outside the city walls. Since the sixteenth century, the town had welcomed powerful noblemen, lawyers and magistrates fleeing the aristocratic, overcrowded and unhealthy Marais district to establish spacious private mansions, following the example of Marguerite de Navarre, wife of Henri II. A number of religious foundations, monasteries and convents also flourished on these religious lands.

On a seven-acre (three-hectare) plot bounded to the west by the Rue du Bac, to the south by the Rue des Vaches (Saint-Dominique; today’s Boulevard Saint-Germain), to the east by Saint-Guillaume and the Pré aux Clercs, and to the north by the Rue de l’Université, the Dominican brothers initiated building of a monastery complex in 1682, which was completed in 1740. The galleries of the cloister led to the refectory and kitchen, chapter house and chapel, pharmacy and infirmary; upstairs were the cells and library, and all this was surrounded by poultry yards, flower gardens, the orchard and the vegetable garden. The monastery chapel, “la chapelle des Jacobins”, was completed in 1770 to the plans of architect Pierre Bullet. The novitiate was a training institution able to accommodate up to 50 brothers and had a well-stocked library of some 14,000 books.

The French Revolution put an end to this religious usage with the banning of monastic vows. Orders and congregations were forced to disperse. The buildings were handed over to the military authorities and earmarked for weapons manufacture; the friars were first relegated to the attic before being expelled in 1793. The chapel was turned into the parish church of St. Thomas Aquinas in 1791, then into a Temple Of Peace by the theophilanthropists in 1795, and finally returned to the Catholic faith in 1803.

A military and scientific conversion

Then began the estate’s second life under the banner of war, science and technology.

In 1795, in the wake of the revolutionary wars and imperial conquests, the galleries of the cloister began to house weapons and armor unfit for use. The cloister became a museum of artillery, with galleries and exhibition rooms open to the public, until the museum’s transfer to the Invalides in 1871.

Also in 1795, the Central Committee of the Artillery moved into the former monastery and sat in the Salon Rouge, with secretariats and offices accommodated on the upper floors. The Committee was responsible for approving the manufacture of war material, inspecting arsenals and supervising the machining of weapons. It established a Central Depot around the Cour Sébastopol, built premises for the precision machining shop in the Cour Treuil de Beaulieu, and, between 1818 and 1840, buildings for Louis Gay-Lussac’s chemistry laboratory, the metallurgy and testing workshops and the forge in the Cour Gribeauval. It was in 1886 that the two courtyards took the names of famous artillerymen: General Gribeauval (1715-1789), inventor of the system of the same name, which enabled the reorganisation of the artillery services and sections to make them more mobile and efficient, and General Treuille de Beaulieu (1809-1886), director of the precision machining shop and father of the Chassepot rifle. Over the years, and despite repeated complaints from a neighborhood discomfited by the potentially explosive activities of the military, the site became home to the technical services and inspectorates of powders and ammunition, of equipment and harnesses, of portable weapons; the maps, charts and drawings depot; the lithography, photography, cinematography and optical workshop; the library; and the archives. Rubbing shoulders there were highly qualified scientists and technicians, specialists in chemistry, metallurgy, mechanics, metrology and ballistics, and, after 1945, atomic physics and electronics experts who belonged to the new Central Department of Equipment and the Central Armaments Laboratory. The premises eventually became cramped and unsuitable, and these departments were transferred between 1949 and 1964. St. Thomas Aquinas then took in the military staff headquarters and, from 1975, the military police.

The continuous expansion, elevation densification, demolition and renovation testify to the Artillerie site’s multiple incarnations. As a result, it combines architectural ensembles of different times and styles, with the monumental seventeenth century cloister neighbouring functional nineteenth century military buildings. Classified and restored from 1982, the buildings are now entering the third—academic and scientific—phase of their tumultuous history. So it is in the footsteps of seventeenth- and eighteenth-century Dominican novices and nineteenth-century military engineers that the students and faculty of Sciences Po will walk in the future.