As energy brings continuous overlaps of political, economic and commercial interests, governments tend to move energy security from the periphery to the core of their agendas, confirming that the role of energy is crucial in shaping relations, leveraging regional balances of power, as well as causing or harshening conflicts within and outside national borders.
Whilst new global risks emerge, the security domain enlarges towards unusual security issues, which require a fast adaptation of traditional institutions, enlarging their responsibilities, tasks and sometimes also the tools at their disposal.
However, the path towards energy security has not been a short cut for NATO. Since the end of WW II, energy has been more and more politicized, becoming an effective weapon for coercion, but also creating a gap between energy owners and the energy starvers.

In the 70s, the oil crisis demonstrated the political implications of fossil fuels and encouraged the Euro-Atlantic community to build a framework to counter the increasing power of oil states. But it is with the end of the Soviet Union that NATO lost its first raison d’être and had to reinvent itself, turning into a very flexible and multitasking instrument, able to perform in different domains.
In the 90s, these two processes converged. In fact, not only the Gulf Wars confirmed the transition of energy into the security domain, but also NATO acquired a different look on regional energy security, following its expansion towards Central and Eastern European countries, which were dependent on Russia’s energy and reliant on the energy supply systems developed during the Soviet era.
Since 1999 the Euro-Atlantic energy security left its traditional market-oriented dimension and became, first of all, a national security concern. In line with this shift, the 1999 NATO Strategic Concept1 has been the first compromise document that openly referred to the “disruption of the flow of vital resources” as a threat to regional security. Although from now on NATO will always makes reference to energy within its scope and priorities, the 1999 Concept and the one2 following did not succeed in translating NATO principle into concrete measures, neither in defining clear guidelines or a mandate.

Euro-Atlantic energy security: the case of the Caucasus

Today several institutions deal with energy and, of course, energy security. Likewise, multilateral efforts to improve European energy vulnerability and its impact on the Euro-Atlantic stability have multiplied in the past decade. In order to keep its primacy as main3 security organization worldwide, NATO had to turn itself into a very flexible and multitasking instrument, which now operates in unconventional fields, including energy security. Among the high variety of institutions dealing with energy security, NATO represents undoubtedly a peculiar player, the only one to be purely military. However, its multi-faceted role has been arduous to define, and its tasks have so ranged from the direct protection of critical infrastructure for energy production and transportation, to crisis management, special training, political dialogue, or military assistance.

Since the beginning of its new commitment, and despite the achievements in the first phase, the expansion of the mandate of the Alliance has not reached a consensus and members are still divided among supporters (the US and most of ex Soviet countries) for a wider participation of NATO in energy security even beyond the transatlantic region, and skeptics (the Europeans), which would rather keep a low profile for NATO: 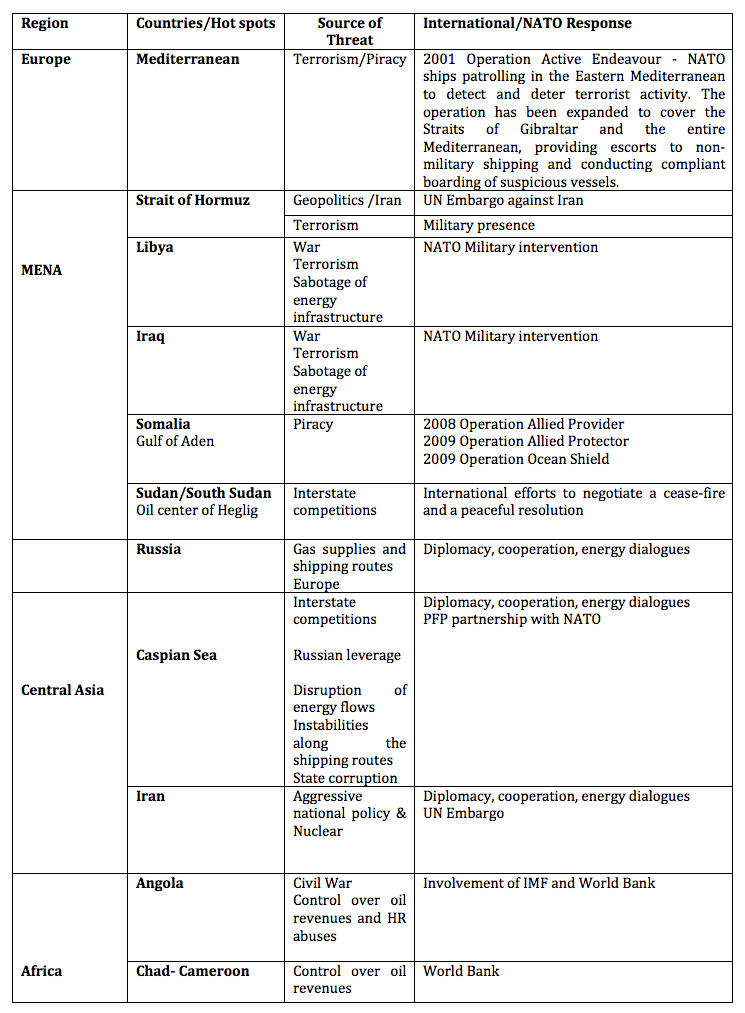 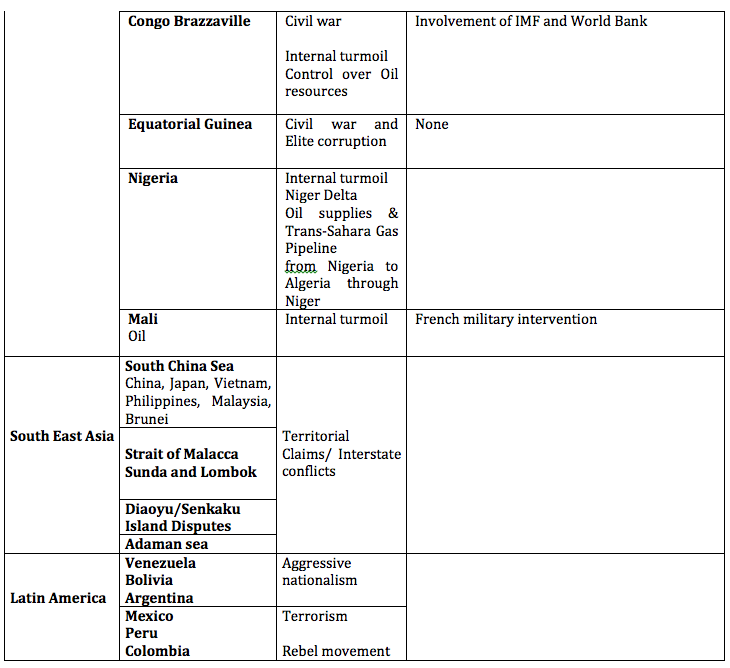 While engaging with energy security, NATO has more and more intensively looked east, to the South Caucasus, across the Caspian, and into Central Asia. In particular, Caspian countries, being a bridge across Europe, Russia, the Middle East and the former Soviet republics, got the attention of the Alliance, which saw in the resource-rich Basin an interesting alternative to the supplies coming from Middle East and Russia.

Of course, the stability of the Caspian region is strategically important for NATO and not only in terms of energy. Given its proximity, the Euro-Atlantic community has always been very sensitive to Caspian instabilities, and if NATO further expands towards the Balkans, the weight of the Basin in shaping concerns, tasks and military requirements will definitively grow.

However, compared to other international organizations, such as the IEA, the EU and the OSCE, NATO has played a secondary role in the Caspian for years. Only recently NATO started to engage directly with the littoral countries, as consequence of the severe militarization of the region, which is currently experiencing an increase of instabilities, caused by territorial disputes over national maritime borders, the uncontested leadership of Russia, and the threatening presence of Iran.

In terms of Euro-Atlantic energy security, stronger relations between Europe and the Caucasus are an essential step to counter European reliance on Russian supplies, as well as to diminish Moscow and Teheran superpower in controlling energy flows. Of course, while reinforcing regional security and economic development through energy diversification, the main obstacle is represented by Russia, since gas is Moscow’s first tool for political leverage. Albeit the Kremlin has largely dissuaded the Alliance to get involved into its backyard and has openly disapproved the trans-Caspian pipelines project, the Eurasian energy corridor represents the first way for European states to secure energy flows. In fact, the development of a Southern Corridor would give Europe a direct access to the Caspian oil and gas resources. The first stage was achieved with the completion of the South Caucasus Pipeline (SCP) for natural gas and the Baku-Tblisi-Ceyhan (BTC) oil pipeline, which also served as the first non-Russian energy bridge across the Caspian, providing market access for trans-Caspian tankers carrying Kazakh oil. Both pipelines carry energy resources from Azerbaijan's offshore fields to Georgia and onward to Turkish markets for natural gas and to global markets for oil.

Accordingly, in view of the strategic importance of energy infrastructure, NATO regional role focuses on the protection of energy assets. Of course, the spectrum of its possible task is still broad and can include: direct proper infrastructure protection in the physical sense (either onshore or offshore), energy area perimeter control, the establishment of  control checkpoints or operations against groups that sabotage or threaten the energy infrastructure, support in the cyber dimension through active and passive capabilities for electronic warfare, or even counter-terrorist operations.
NATO can indeed play a central role in energy security.

First, it brings together key geographical areas, like North America, Western and Eastern Europe. For instance, the Alliance benefits from the presence of US, which has largely supported its European partners, especially for the creation of an alternative Southern Gas Corridor to diminish the influence of Russia and Iran in global energy security; also from the participation of Turkey, which is the sole regional power that has the real ability to challenge Russian monopoly over the region, and allow Europe to access energy resources.

Second, NATO has succeeded in creating a stable framework for dialogue with key energy players, notably the NATO-Russia Council and the PfP Program, which establishes specific bilateral cooperation with Armenia, Azerbaijan, Georgia, Kazakhstan, Kyrgyzstan, Tajikistan and Turkmenistan. For instance, with Azerbaijan and Kazakhstan NATO established cooperation on defense reform, policy and planning, education and training, military, science and environmental issues, as well as in civil emergency planning and disaster-response. Above all, it is crucial that, given the interdependence created by the gas infrastructure, the Euro-Atlantic community doesn’t constantly move away from Russia, but capitalizes on the opportunity that NATO offers to cooperate with Moscow, also in the field of energy.

Third, the Alliance offers a great platform for decision-making, military planning and political consultations, it provides highly qualified intelligence, it promotes scientific and technological cooperation, it establishes a broad network that includes energy producers, consumers and transit countries, as well as it combines different levels of security, from human safety to infrastructure security.

Finally, energy security has indeed a strong military dimension, especially within vulnerable region like the Caspian, where armed conflicts are still on. The Baku-Tblisi-Ceyhan pipeline, for example, runs through a highly exposed area, including Georgia with its two unresolved conflicts, and the Azeri land, with the troubles posed by the Nagorno-Karabakh Republic. Especially, during the 2008 war in Georgia, the Baku-Supsa pipeline was temporarily shut down, making European members doubting about the reliability of the route, which represents a key arm of the Eurasian energy infrastructure.

The challenges to NATO intervention

•  A lack of means and tools at NATO’s disposal, which impedes to implement the intentions expressed in NATO’s Strategic Concept.
•  Russia’s reluctance to engage in a joint-effort with NATO. Any action that the Alliance would implement, especially when involving the military, could give rise to a Russian reaction to counterbalance the Euro-Atlantic presence in such a vital region for its national interest.
•  Priority of national security and energy agendas within NATO’s members. Peculiar interests and needs intensify the eternal dispute among supporters and opponents for a greater NATO’s commitment to energy security .
•  Weak cooperation on energy security with Caspian partners. Although NATO has been cooperating within the framework of the PfP with Azerbaijan, Kazakhstan, Turkmenistan and also Russia since 1994, there has been no agreement to explicitly and exclusively target energy security.

Energy security is still a potentially divisive subject. NATO’s response so far has been reactive, and its impact, if compared to its potential, has been feeble. In fact, the concrete role of NATO in addressing European gas vulnerability is still vague. NATO does not address the root of the problem, it does not finance the construction of gas interconnectors, LNG receiving terminals, pipelines to Caspian-region suppliers, or other critical infrastructure; it does not require its members to meet certain energy efficiency targets in its gas-heated buildings and key industries. NATO has been working as a forum for discussion, taking advantages from its long-standing relations with Russia and its appeal with former Soviet countries.

Within the Euro-Atlantic community, the Caspian basin its gas resources represent an opportunity but also a problem, especially given the Russian variable. Even if in the last decade Europe’s dependence on Russian energy resources has been reduced, thanks to significant investments in European regasification infrastructure, larger gas storage, better regional interconnections and the diffusion of LNG, the energy market still presents serious uncertainties, which magnify the challenge of finding a compromise with all the actors involved.